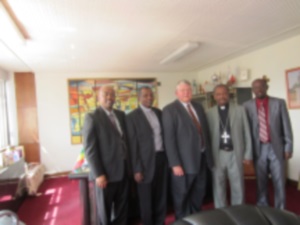 At it’s 2012 Convention the people of the Southern District committed to a resolution to explore ways to strengthen our relationship with Mekane Yesus (house of Jesus), our Lutheran brothers and sisters in Ethiopia.

Because East Africa has been the target of many years of mission work by various evangelical groups, the LCMS strategy has been to provide complementary strategy, resources and personnel to support the work of existing mission partners from other Lutheran groups.

The LCMS works with various synods (which are similar to LCMS districts) of the Ethiopian Evangelical Church Mekane Yesus (EECMY). A partnership agreement was signed by the LCMS and the EECMY in January 2010 that formalizes the relationship for mutual mission as church bodies and provides a framework for exploring each other’s understanding of our Lutheran identity.

Because the growth of the East African church has been explosive in recent years, a great need exists to train indigenous leaders who can minister to the large numbers of people who are newly baptized and to many other new villages that have asked for the Gospel. Therefore, the main thrust of LCMS work has been to help build regional mission training centers (MTCs), in cooperation with a number of synods of the EECMY, where national leaders can be mentored and trained in evangelism and church planting. Training seminars for women in these facilities is also a priority. .

The EECMY is one of the largest and fastest-growing Lutheran church bodies in the world. The first congregation of this church body was organized in 1929 and its building was constructed in 1948. By 1959, the EECMY claimed 20,000 members, and today, claims an estimated  6 million members, with 2 million children attending Sunday school on any given Sunday, and is served by more than 2,000 pastors in 20 semi-autonomous synods. Its annual growth rate is estimated at 15 percent. Though Ethiopia is one of the poorest nations in Africa, the church here exists largely within its own capacity at the local level and reaches out into the community with various ministries. When asked why the church has grown so dramatically, one EECMY pastor responded, “Commitment to proclaiming the Gospel from the leadership down, strong commitment to prayer and strong tithing by the people no matter what they have.